Undoubtedly pimpage of executive orders as a GOP stunt to criticize the Congressional impasse and circumvent legislation.

More amusing will be whether Trump will mention the PGA Championship. Chances are he’s been watching golf all day and now wants attention. CNN is covering it, as is MSNBC and CSpan.

There’s a presser from the Trump golf club because optics matter: “Congress needs to stay in Washington and work this out. Now watch this tee shot.”

From which hole? ⛳️

How long will he allow questions or will he follow the usual pattern of keeping pressers around 30 minutes. Someone should ask him about the superspreader event in Sturgis SD, among other things like how Biden is “against God”. It’s another stunt, pretending that he didn’t play golf this morning and that he’s doing work, even in reality there are two GOP fundraisers this weekend in NY and NJ.

Thousands of bikers are pouring into the small South Dakota city of Sturgis as the 80th Sturgis Motorcycle Rally rumbles to life. The rally could become one of the largest public gatherings since the coronavirus pandemic began. https://t.co/ayxAxjl8Ds

Rush Limbaugh attacks Biden’s faith: Talk about family tragedies is just “a crutch” that liberals “are allowed to lean on” https://t.co/RU9OHuhaAA pic.twitter.com/jhd8AJplEy

It almost feels too obvious to have to point this out, but the ODNI statement does not say China is interfering in the election. pic.twitter.com/68Gf6jV8Hj

Hey, look—my new book EVIL GENIUSES: THE UNMAKING OF AMERICA isn’t out until next week but there’s a hefty excerpt in ⁦@TheAtlantic right now! https://t.co/vsNRwdopqN

Feeds are up. Country Club members are attending the presser as an audience, complete with beverages in hand. AP’s Jonathan Lemire reports that no one was temperature checked. Looks like it won’t start until 730 pm because he’s always late.

Spreader event in violation of crowd size: remember this is the same venue to which Trump invited those bikers in the rainstorm.

One of the drunks in the back needs to pipe up during this, one of whom put his hand in front of the live CSpan lens (hey, it’s Jersey fuhgeddaboudit). Trumpo starts at 732pm:

The legality of much of the unilateral stuff Trump is talking about doing is uncertain. https://t.co/JDb70f88iS

Trump says he will “enhance unemployment benefits through the end of the year,” though I think (think) he’s still saying he’s not doing this quite yet. He doesn’t say what level the benefits would be at.

Trump going sing-songy (child cries out in the background)

TVA “semi-public” labor kerfuffle “we’re going to do something about that” Trump tries to suck up to labor Apparently Trump hasn’t read the text before.

On Latin America and COVID (US Total resembles Mexico and Brazil) Trump claims “we’re doing well” more Trump nonsense about US hot spots. “heading down very rapidly” mentions AZ and FL. It’s clear this propaganda was meant to displace national news, and the only news was that relief funding stunt.

CNN and MSNBC went away, because of Trump spin, probably the “Hail to the Chief” did it.

Trump says, “in the not too distant future,” we’ll have lots of rapid tests, as opposed to having to a three-day process of getting results from a lab.

In a lot of countries (and some places in the US), it doesn’t take three days to get results from lab tests…

Trump goes back to reading is getting bored, this has been a campaign speech. Trump doesn’t understand “favored nation” regulations (he doesn’t note that there are many exemptions in terms of domestic production)

(children continue babbling) Trump tries to make joke about “middle-women” — falls flat, tries again saying he doesn’t know who those people are -which is an in-joke for the country club crowd.

Trump criticizes prescription drug middlemen. “Middlemen. I guess you’d have to say, to be politically correct, middlemen AND WOMEN. But you never heard the middlewomen before. You heard middlemen. That’s the term.”

Trump talks about Molotov cocktails in Portland, says the city’s mayor is “disgraced,” talks again about the mayor’s security detail, denounces “left-wing violent extremism” as “an increasing threat to our country.”

Trump now has put 30 minutes in on campaign speechery MSNBC and CNN are still not covering it, waiting for questions, Fox News has not cut away.

Q: negotiations with the Hill?

Asked when he might sign these executive orders he talked about on coronavirus relief, Trump says “it could be by the end of the week.” He says he’s not worried about the legality, though “probably we get sued.”

“nobody’s been tougher on Russia than me” Trump goes blah-blah on deals with Iran and DPRK, does usual campaign speech tropes on China, etc… including blah-blah about employment numbers

Trump says “we have a terrific number of things and some very positive things” to talk about. He mentions the “China virus,” then boasts about the 1.8 million jobs added in July and the 9.3 million jobs added since May. (This followed a loss of 22 million jobs in March + April.)

Q: what do you plan to do about that interference?

Q: why weren’t you more involved with Congressional negotiations?

Trump says he will “enhance unemployment benefits through the end of the year,” though I think (think) he’s still saying he’s not doing this quite yet. He doesn’t say what level the benefits would be at.

Q: why haven’t you spoken to Pelosi?

Q: where are you going to get the money?

“we have the money”

Asked if people will still get $600 a week under his plan, Trump says, “I won’t say that yet.” But “we have the money…we have plenty of money.” No specifics.

Q: you say the pandemic is disappearing, what about the people in the room

Trump sees it’s getting out of hand —  flees

not quite an hour.

Guest
John Johnson
Share On FacebookShare On TwitterShare On Google

CAN NOT WAIT TILL ALL THESE AS$HOLES ARE GONE!!!

Guest
chris whitley
Share On FacebookShare On TwitterShare On Google

Yeah it’s hard to get them to stay on that blessed red carpet. And we don’t even want to go to those Russian chefs.

Guest
Lou
Share On FacebookShare On TwitterShare On Google

Hey isn’t Limbaugh DEAD? I thought this thing was dead. He can’t stay dead., what the hell. His talking bullshit again dam this idiot sounds just like my toilet flushing. This thing was born a loser like trump, all mouth no guts. Maybe he to was picked on by bullies and like trump just took it without fighting back, cowards . Now both are nothing but blow hards C fake no substance failed RSVP.

Guest
Lou
Share On FacebookShare On TwitterShare On Google

There we go again spending tax payers money, spending 40 million in golfing, that’s after he said he would except a paycheck since he was super wealthy. Hell I would too. Do the math 300,000.00 per year versus 50 million spending just on golf rallys in four years. Playing golf while 51 million people out of a job and the virus milling 163,000.00 dead and he celebrating just a dumb ass loser. This thing is a failer or a DEMENTED IDIOT.

Guest
drjillinNH
Share On FacebookShare On TwitterShare On Google

This is what Thug-1 has accomplished so far: 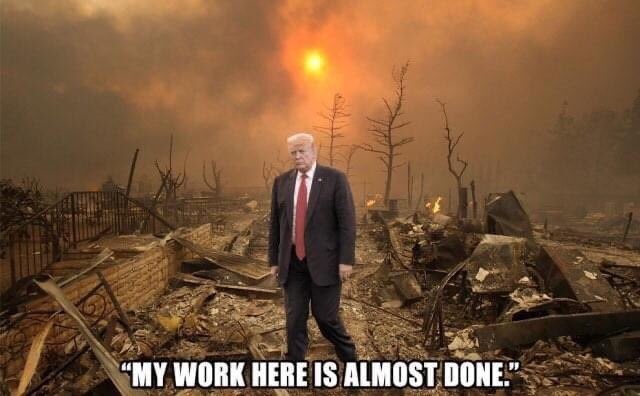 Barr’s Justice Department is weaponizing the ‘rule of law’ to attack...

Millions in U.S. could still die from COVID-19 if we keep...

Barr’s Justice Department is weaponizing the ‘rule of law’ to attack...