The Republican civil war hits a critical moment on Wednesday over the fate of two prominent lawmakers who represent rival visions for a party torn by the toxic but still powerful influence of Donald Trump.

Real-time reckonings for third-ranked GOP House leader Liz Cheney and Rep. Marjorie Taylor Greene, a freshman congresswoman who has espoused outlandish and dangerous conspiracy theories, will help establish the extent to which a loyalty oath to the ex-President remains the party’s dominant principle.
Cheney is expecting to confront a venting session over her vote of conscience to impeach Trump in the House Republican Conference on Wednesday. In the coming days she faces a fight to hang onto her leadership post. She is also confronting a potential primary challenge at home over her decision.
Party leaders will meanwhile resume consideration of whether to censure Greene, who spent several hours in a meeting with House Republican Leader Kevin McCarthy on Tuesday evening. There is pressure from Democrats and Senate Republicans for her to lose committee assignments over offensive social media activity before she ran for office and her behavior in only a month as a Georgia representative. 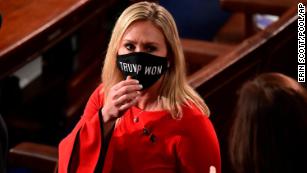 House Republicans weigh stripping Greene from committee assignments as GOP senators repudiate her views
The challenges facing Cheney and Greene encapsulate the raging battle for the control of the GOP between orthodox conservatives and pro-Trump radicals who are viewed by the establishment as a “cancer” and “wacky weeds.”
Cheney, the daughter of former Vice President Dick Cheney, is the epitome of the old school, ultra-conservative but internationalist Republican Party that disdains Trump’s assault on democracy. Greene is a proponent of the QAnon conspiracy theory and is an avatar of the wild fringe welcomed into the GOP by Trump.
McCarthy’s painstaking effort to walk a line between the wings of the party represented by the two lawmakers was made immeasurably more difficult when, according to Greene, she and Trump spoke in a recent phone call, The former President’s power play came after he received McCarthy for an audience at his Florida resort. The visit was a stunning indication of how Trump is still calling the shots for much of the House GOP — even after his mob invaded the Capitol in a January 6 insurrection
In a somber reminder of the cost of Trump’s actions, President Joe Biden traveled to Capitol Hill on Tuesday to honor fallen Capitol Police Officer Brian Sicknick who died as a result of the assault. Sicknick’s cremated remains lay in repose in the very Rotunda breached by Trump’s rioters nearly a month ago.

The volatile state of the GOP is evident in the way that Cheney faced far more public criticism from her House colleagues than Greene, an advocate of a fringe conspiracy theory anchored on baseless claims that Democratic leaders are pedophiles.
Two officials familiar with her meeting with McCarthy told CNN’s Manu Raju on Tuesday evening that the GOP Steering Committee has not decided whether to strip Greene of her committee posts. There was no indication that Greene has shown any remorse for her extreme behavior, which includes past support for the assassination of top Democratic officials, 9/11 trutherism and claims that the Parkland, Florida, school massacre in 2018 was a false flag hoax.
McCarthy asked if Greene would apologize for her past comments and views, which she did not agree to, a person with knowledge of the matter tells CNN. Another person familiar with their conversation also said that McCarthy provided a slew of options to her, including that she could show remorse and apologize.
Top GOP senators, like Minority Leader Mitch McConnell and Lindsey Graham of South Carolina, have defended Cheney. But emphasizing her growing estrangement from the GOP House caucus, a Trump acolyte, Florida Rep. Matt Gaetz, even traveled to Wyoming last week to rally against her and to initiate an effort designed to end her career. The visit underscored how Trump’s loyal base is still dictating the party’s direction, even with the ex-President out of the White House and as some GOP power players hope his influence will fade.

Tensions sure to rise over impeachment trial

The tussle that is tearing the House GOP apart — and alienating its members from their brethren in the Senate — is coming at an especially fraught moment with the second Trump impeachment trial set to start in the Senate next week.
The former President’s team indicated Tuesday that it intends to once again highlight Trump’s dangerous lies about a stolen election, while Democrats present graphic evidence of his insurrection that will discomfort GOP senators. 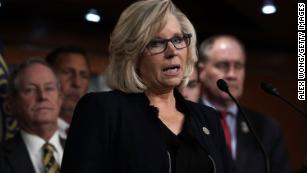 Cheney shoring up GOP support behind the scenes ahead of crucial conference meeting
The outcome of the drama involving Cheney and Greene are skirmishes in the wider search for the GOP’s identity that will shape the run-up to midterm races next year and weigh on the GOP’s chances of fielding candidates capable of helping recapture Congress — a crucial consideration for Biden’s presidency.
Fundamentally, the fight that rips away at the Republican Party every day is the one ignited the moment that Trump declared his candidacy for president in 2015 and directed the GOP on a wild populist, nationalist ride.
It has been exacerbated by a generation of pro-Trump figures inspired to run for Congress by his success.
The choice before House Republicans was best captured by John Thune, one of several Senate Republicans who spoke up after their leader McConnell rejected Greene’s “loony lies and conspiracy theories” as a “cancer” for the party.
Thune argued Tuesday that “the House Republicans are going to have to decide who they want to be.”
“Do they want to be the party of limited government and fiscal responsibility, free markets, peace through strength and pro-life, or do they want to be the party of conspiracy theories and QAnon, and I think that is the decision they’ve got to face,” Thune said.
Another mainstream Republican, the party’s 2012 presidential nominee Mitt Romney — who is now an outlier cut off by the Trumpian tide — also weighed in.
“I think our long history as a party has shown that it’s important for us to separate ourselves from the people that are the wacky weeds,” the Utah senator said. “If we don’t, then our opposition tries to brand us with their image and with their point of view, which has been detrimental to any party that doesn’t do that.”

GOP is hostage to its most radical elements

The challenge for the broader Republican Party, however, is that there is plenty of evidence that the party’s activist base is not excited by small government, debt reduction, globalization and a hawkish foreign policy — four pillars of the Republican Party for decades between Ronald Reagan and Trump.
“We have to be aware that Marjorie Taylor Greene has a very wide following in this country,” said Gabriel Sterling, one of the Republican electoral officials who stood firm against Trump’s attempt to steal the election in Georgia.
“I mean, she’s raised millions of dollars based on things that she said and sometimes … being attacked by the quote/unquote ‘elites’ only drives her up in terms of the esteem she’s viewed by many, many people,” Sterling told CNN’s Kate Bolduan on Tuesday.
In many ways, this is a schism that the Republican Party in Washington has brought on itself, and that is already more destabilizing than the influxes of radical lawmakers brought into Washington by the Tea Party uprising and New Gingrich’s Republican revolution that captured the House in 1994.
Four years of appeasing Trump’s uncouth character, unconstitutional power grabs and appeals to baser instincts — in a Faustian pact that returned a conservative Supreme Court — has effectively provided an entry path into the party for the extremists who found inspiration in the ex-President.
McConnell is turning against die hard Trumpists like Greene and Capitol Hill insurrectionists now. But his failure for weeks to condemn the ex-President’s assaults on the integrity of the election helped brew the crazed atmosphere that Trump exploited when he incited the Capitol insurrection on January 6.
The strength of the pro-Trump faction in the GOP — at a time when more traditional conservatives like McConnell would like to rid themselves of his influence — was underscored by the fact that a majority of House Republicans voted not to certify Biden’s election win over election fraud lies.
And even in the Senate, 45 Republicans — including McConnell — voted to support Sen. Rand Paul’s attempt to have the impeachment trial that begins next week declared unconstitutional.
The conundrum for the wider GOP is that the path to fundraising riches, fame and primary success lies in sponsorship from Trump. McCarthy’s pilgrimage to Mar-a-Lago to meet the ex-President last week shows that he believes his hope of winning the House lies closer to Greene’s appeal than Cheney’s.
Senate Republicans however have long memories about past races squandered by extremist candidates. And Trump’s style of politics just cost the party two runoff elections in Georgia that handed the Senate to Democrats.
“Whose side do I want to be on? Liz Cheney or Marjorie Taylor Greene?” former Arizona Sen. Jeff Flake, who was himself driven out of the party because of his opposition to the Trump revolt, asked on “The Situation Room” with Wolf Blitzer, in encapsulating the electoral conundrum facing an increasingly ungovernable GOP.
“Where do you think the party will likely grow more or where do I want to be as an elected official? It is pretty stark and that is what the party is facing right now.”