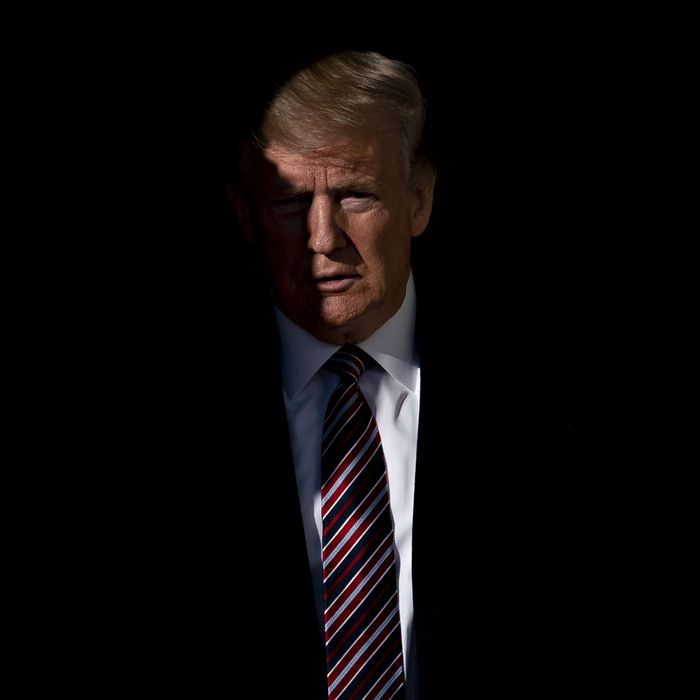 President Trump’s second impeachment, like the other repudiations he has suffered, feels provisional. He is never quite banished. He is impeached, but Senate Republicans refuse to convict or even allow evidence into his trial. He loses the election, but won’t concede, and may just run again. He is impeached again, but his trial is delayed until after his departure date. It feels as if we have spent four years watching the wheels come off, yet the vehicle somehow still keeps rolling forward.

But now, finally, the end is at hand. Trump is suffering a series of wounds that, in combination, are likely to be fatal after Joe Biden is sworn in on January 20. Trump is obviously going to surrender his office. Beyond that looming defeat, he is undergoing a cascading sequence of political, financial, and legal setbacks that cumulatively spell utter ruin. Trump is not only losing his job but quite possibly everything else.

One crisis, though the most opaque, concerns Trump’s business. Many of his sources of income are drying up, either owing to the coronavirus pandemic or, more often, his toxic public image. The Washington Post has toted up the setbacks facing the Trump Organization, which include cancellations of partnerships with New York City government, three banks, the PGA Championship, and a real-estate firm that handled many of his leasing agreements. Meanwhile, he faces the closure of many of his hotels. And he is staring down two defamation lawsuits. Oh, and Trump has to repay, over the next four years, more than $300 million in outstanding loans he personally guaranteed.

Trump has reinvented his business model before, and he may discover new income streams, probably by monetizing the loyalty of his fanatical base through some kind of Trump-branded “news” organization, as has been predicted since before the 2016 election. But starting a media property is difficult and hardly a guarantee to make money. (It’s not as if conservative alt-news fans have nowhere else to find an angry white man shouting about antifa, socialism, and Black Lives Matter protesters.) One Republican who speaks to Trump hopefully suggested Trump can make money holding more rallies: “If you can [get] 30,000 people to show up and you charge them $5, that’s real money,” he told the Post two months ago. Actually, a $150,000 gross payout, before deducting the costs of renting a venue, staff, security, and travel, is probably a negligible — or even negative — profit, not “real money,” and the fact it’s being considered reveals a certain desperation.

And if Trump can’t make money luring customers to watch him do the “Lock them up” chant and dance to “Macho Man,” and he can’t do the hard work of launching a lucrative media brand, then he’s back to giving away his rants for free on other peoples’ networks (now that he can no longer give them away for free on Twitter).

If this were still 2015, Trump could fall back on his tried-and-true income generators: money laundering and tax fraud. The problem is that his business model relied on chronically lax enforcement of those financial crimes. And now he is under investigation by two different prosecutors in New York State for what appear to be black-letter violations of tax law. At minimum, these probes will make it impossible for him to stay afloat by stealing more money. At maximum, he faces the serious risk of millions of dollars in fines or a criminal prosecution that could send him to prison.

Trump reportedly plans to pardon himself along with a very broad swath of his hangers-on. But a pardon hardly solves his problems. For one thing, a federal pardon is useless against state-level crimes. For another, the self-pardon is a theoretical maneuver that’s never been tested, and it’s not clear whether the courts will agree it is even possible to do so.

And what’s more, a pardon might constitute an admission of guilt, which could open up Trump to more private lawsuits. Remember how O. J. Simpson was ordered to pay $34 million to the families of Nicole Brown Simpson and Ronald Goldman, even after he beat the murder rap? The families of victims of the January 6 riot might well sue Trump for his role in inciting the violence. Trump might try pardoning himself to make sure he can’t be charged with criminal incitement, but admitting the crime makes it even easier to bring a civil suit against him.

The easiest way out of the self-pardon dilemma would be for Trump to make a deal with Mike Pence, under which he would resign before leaving office and Pence would grant him a pardon. Unfortunately for Trump, Pence is still sore about the whole “whipping up a paramilitary mob to lynch him” episode. ABC reported recently that Trump does not want to resign, in part because he doesn’t trust his vice-president to pardon him.

The assumption until now has always been that Trump wouldn’t really be convicted of crimes or sentenced to prison, despite the fairly clear evidence of his criminality. American ex-presidents don’t go to jail; they go on book tours.

That supposition wasn’t wrong, exactly. It rested on the understanding of a broad norm of legal deference to powerful public officials and an understanding of the dangers of criminalizing political disagreement. But what has happened to Trump in the weeks since the election, and especially since the insurrection, is that he has been stripped of his elite impunity. The displays of renunciation by corporate donors and Republican officials, even if they lack concrete authority, have sent a clear message about Donald Trump’s place in American society.

It might be easy to overlook the significance of Mitch McConnell letting it be known that he wishes to be rid of Trump. McConnell probably won’t push for Trump’s conviction in a second impeachment trial, but he does wish to disqualify Trump from holding office and clear away the threat of a third straight presidential election with Trump at the top of the ticket. A prison sentence would solve that problem nicely.

McConnell obviously can’t dictate decisions by prosecutors or courts. But courts do follow the lead of political elites. And if McConnell sees Trump as a liability for the party and the conservative movement, the ideologue judges he helped install just might see it the same way. Trump will be staving off lawsuits, state prosecutions, and possibly federal prosecutions. He needs help from the courts, and the reserves of latent deference and sympathy he might have counted on to save him will be exhausted.

At noon on January 20, Trump will be in desperate shape. His business is floundering, his partners are fleeing, his loans are delinquent, prosecutors will be coming after him, and the legal impunity he enjoyed through his office will be gone. He will be walking naked into a cold and friendless world. What appeared to be a brilliant strategy for escaping consequences was merely a tactic for putting them off. The bill is coming due.

Why Trump Would Make the Most Boring Social Media Site Ever

Trump’s plane put out to pasture