By Alex Koppelman and Donie O’Sullivan

Sometime Monday, some of the remaining dead-enders convinced that President Trump will remain in office for at least the next four years got a sign. A Telegram account falsely purporting to be run by Gen. John Hyten, the vice chairman of the Joint Chiefs of Staff, was telling them that the moment they’d been waiting for, the moment Trump would finally act and use the military to crush his enemies, was coming.

“Nothing can stop this,” the account said in a message that had been seen by at least 185,000 people as of Tuesday morning. “They can no longer hide in the shadows,” it added half an hour later. Then, 20 minutes later: “Last hours.” It continued on like this. Around 10 a.m. ET it posted an ominous picture of soldiers in uniform behind a fence in Washington DC with the caption “Stay in your homes.”
By Tuesday afternoon, the account had almost 220,000 followers — likely helped by the fact that it was being widely and actively discussed and promoted on other platforms including Twitter (TWTR) and Facebook (FB). After CNN asked about the people sharing links to and promoting the Telegram channel on its platform, Twitter said it was “taking action on accounts sharing it” and would prevent the link from being tweeted further. Additionally, Facebook spokesperson Andy Stone told CNN that Facebook had started blocking the link to the Telegram account as of early Wednesday morning. 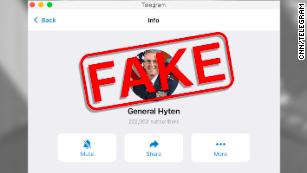 A spokesperson for Gen. Hyten told CNN Tuesday morning that the account is “an absolute fake” and added the Pentagon was “actively working” to get it taken down. Tuesday afternoon the account was marked as a “scam” with the message, “Warning: Many users reported this account as a scam or a fake account.” The account has since shed some followers, and many of the messages have been removed. A Telegram spokesperson told CNN, “Telegram monitors reports and warns users about fraudulent accounts in clear-cut cases like the one you pointed out. ” Facebook and Twitter did not immediately respond to requests for comment.
The account, which largely reflected old tropes from the QAnon conspiracy theory, was emblematic of a bigger trend. A sizable group of people who believe the lie that the election was stolen from Trump and that someone or something — the courts, state legislatures, members of Congress, Vice President Mike Pence — would stop Joe Biden from being inaugurated have not been dissuaded from that belief. Instead, they came to believe that the only thing left is violence, and blood. They are convinced, even now that he’s left Washington, that Trump is about to institute martial law — and they can’t wait. 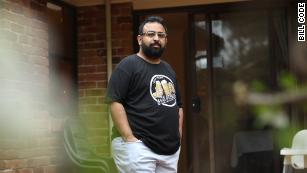 He went down the QAnon rabbit hole for almost two years. Here’s how he got out
The conspiracy theory has at its root the same thing that inspired the riot inside the Capitol on January 6th — the false idea that the election was stolen and American democracy under threat, and someone had to do something. Then, the rioters took it upon themselves. After the riot, similar groups of people had faith that they could hang back and wait because Trump and the military would take action. But given the way conspiracy theories work generally, and the way they have proliferated after the riot, it is easy to imagine these theories spinning out in new ways once it is clear no such action is coming.
Much of the discussion around martial law online ultimately connects to QAnon, which has long had a promise of and a lust for blood. But the people who are excitedly discussing the possibility of a military takeover may not know the origins of their obsession. And the phenomenon does not appear to be confined to a niche corner of the internet.
close dialog
Over the past two weeks, CNN has seen Trump supporters embracing the idea in large numbers and across multiple social media platforms.
On Facebook, a video in which a man warned people they should stock up on food before martial law was implemented was viewed more than five million times before it was fact-checked and marked as false. The video is no longer on Facebook, though it is not clear who took it down. CNN has reached out to Facebook for comment. 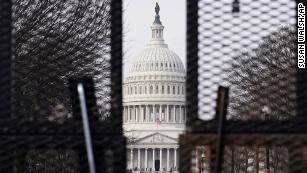 Facebook posts promoting violence still circulated even after insurrection
On YouTube, a man who had previously been best known for his claims that he has an alien mother and an alien daughter has suddenly become a star. He racked up more than 3.5 million views with a video in which he claimed that Trump had signed the Insurrection Act, a prominent feature of many martial law conspiracy theories. Another video in which he said that as much as 85% of Congress could be arrested has been viewed almost 1.7 million times. After this article was initially published, Ivy Choi, a YouTube spokesperson, told CNN that the company had removed the latter video after being asked about it by CNN, saying it had “violat[ed] our presidential election integrity policy.”
On TikTok, thousands if not tens of thousands of people have been seeing and reacting to dozens of videos tied to the conspiracy theories. Those videos range in subject, all tied to the same false idea that Trump is about to institute martial law — in some, people excitedly film the movement of military vehicles, convinced it’s a sign; in others, people repeat warnings about being prepared with food and water; one popular theme is that at any moment Trump will use the Emergency Broadcast System to announce the beginning of his move. There is rarely, if ever any sign of hesitation or concern over the lives that might be lost.