Donald Trump’s Twitter and Arizona rally tirade last weekend about NFL players who #TakeTheKnew during the national anthem spawned worldwide conversation and controversy about America’s First Amendment—the freedom of speech. The so-called #FakePresident called the players “Sons of Bitches” and demanded coaches kick them out of games and fire them.

Trump’s white nationalist/racist supporters decided to perpetuate the misguided hatred further by publishing a fake photo showing a Seattle Seahawk player burning the flag—except he wasn’t burning anything. That doesn’t seem to matter to neo-nazis who blatantly ignore the real reason for the player’s peaceful protest—police brutally against people of color. Instead Trump fanatics twisted the protest around to make it look like it’s about atheletes disrespecting the American flag.

Here an actual photo tweeted out by the Seattle Seahawks on January 3rd of 2016.

What do you do in the victory locker room? You victory dance.#SEAvsAZ pic.twitter.com/qJoVyG6ZM8

Here is the Trump’s Fake News photo-shopped image tweeted out by his supporters. Some on the internet are calling this an act by Russian “bots.” Others know all to well that this kind of racism is alive and well in “Trump’s America.” 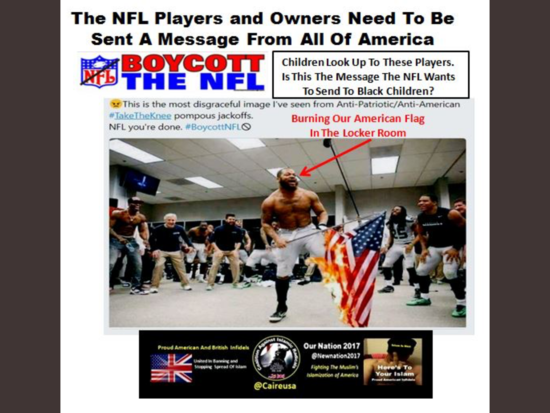 To make things worse, the deplorables depicting and spreading this fake image are using a black football player to further promote racism and fear  people of color. This is one more byproduct of “Donald Trump’s America” and the election of one of the most corrupt and hate-filled president’s in this countrie’s history. He will have his day.

Thank you to all the real American patriots who are brave enough to risk their jobs, reputations and livelihood to stand up for the freedom of speech and peaceful protest by anyone and everyone in this country. This is the essence of American democracy