At this point you’ve probably heard about the far-right Republican who trafficked in conspiracy theories and bigoted tropes on social media.You may well be thinking of Georgia Rep. Marjorie Taylor Greene, the House Republican recently stripped of her committee assignments for her threatening and patently false statements, but I’m

talking about my opponent this past fall, Republican Ted Howze. 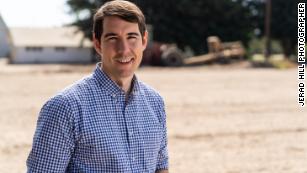 Josh HarderHowze, a veterinarian by training, ran for Congress in 2018 and 2020. Prior to seeking congressional office, his social media accounts mocked a Parkland school shooting survivor, argued that Muslims could not be good American citizens and replayed dangerous and debunked conspiracy theories.close dialog

Though he removed the aforementioned posts and said that he didn’t write them, neither he nor his campaign provided any detail as to who wrote the posts in question and why Howze allowed them to remain on his Facebook and Twitter accounts for so long, according to reporting by Politico.I can only assume that, had I lost my race for the US House of Representatives in 2020, the “conspiracy caucus” might have been one member stronger. Luckily, I was able to ensure that didn’t happen. I believe it’s important to share how I did it so we don’t see more conspiracy theorists walking the halls of Congress.Admittedly, my community is more moderate than Greene’s. And while my district is on the Republican target list for 2022, Greene represents a solidly red one unlikely to flip.However, these numbers don’t tell the whole story.

The fight over Marjorie Taylor Greene poses a threat to the entire countryAs a Democrat, I earned the votes of more than 20,000 people who also checked the box for Donald Trump. Many of these voters likely feel left behind by our government and, rightfully, are angry about it.But here’s what they taught me: To beat the conspiracy theories, we have to prove to these voters that democracy still works. Approaches like Greene’s feed on our neighbors’ anger and then spins it to tell them our government is so broken and so corrupt that we have to overthrow it. She has suggested on Twitter, for example, that our government is so power hungry it would lie about a school shooting. And people believe her. (Just before being stripped of her committees, Greene acknowledged that school shootings, like Parkland, were “absolutely real.”)We have to acknowledge our neighbors’ anger and then show them that government can, if used properly, actually help their families. And as elected officials we do this by putting our heads down and, yes, working with people on the other side of the aisle to pass legislation that improves the lives of all Americans.I know the Republicans in my community. I work with them every day. They know what their party used to be, and I do, too. And although I may get in trouble for saying this, I want the Republican Party to be a real party again. We’ve always had policy disagreements, but we used to start from a common set of facts and values. We’d argue about spending and the marginal tax rate, but we’d never argue about whether an international pedophile syndicate is selling children out of a pizza shop. Come on.

The GOP needs to screw its head on straightDemocrats, this is also partially on us. We gave Republicans an outsized set of wins in the House this past election because we didn’t effectively prove we could fix people’s problems. And that helped Greene rise within a party that controls nearly half of Congress.The best response to the chaos and the division of the last four years is not just watching former President Trump leaving office in disgrace but showing people what competent governance looks like. Right-wing propagandists caricature the Democratic platform as firing every police officer and nationalizing all banks and hospitals. The antidote to that distortion isn’t arguments on Twitter — it’s building a record of helping people that’s felt by so many people that the lies fall flat.That’s what we did right in my community. Sure, we didn’t solve the climate crisis or make health care affordable overnight, but we asked our constituents what they wanted, and we did our best to deliver meaningful change they could see and feel.For example, I heard from local veterans that they weren’t getting coverage from the Department of Veterans Affairs for diseases linked to their service in Vietnam, so I worked to pass the Fair Care for Vietnam Veterans Act in the yearly National Defense Authorization Act, a bipartisan bill to get them the benefits they earned. Now, any veteran suffering from bladder cancer, Parkinson’s, or hypothyroidism due to Agent Orange exposure is eligible for full VA benefits for their condition.We knew our district’s farmers didn’t have enough water to get them through increasingly bad droughts, so we got them the first funding in decades for a new water storage project. We delivered millions in funding through the bipartisan 2020 Omnibus, which included the Energy and Water Development and Related Agencies Appropriations Act for the Del Puerto Canyon Reservoir, Sites Reservoir and Los Vaqueros Reservoir expansion.

And we heard the craziest story from environmentalists and farmers alike — that an invasive swamp rat called the nutria was destroying our crops and waterways. So I brought a taxidermied swamp rat to the floor of Congress, found Republicans also facing the same issue and made our state eligible under the Nutria Eradication and Control Act to receive federal funding for eliminating them.This work isn’t necessarily the most glamorous, nor does it grab the most headlines, but it’s what actually helps my district and my community. And so when I ran for reelection, some of these left behind voters were convinced that maybe democracy doesn’t need to be overthrown after all — maybe government really could help, at least from time to time.Only by doing this work, by showing rather than telling what government can accomplish, can we reset our politics and move past those who want to drag us down to the darkest corners of the internet.

Pandemics don't stop causing damage even when the disease goes away