(CNN)For years, South Carolina Sen. Lindsey Graham was a prominent sidekick to his maverick colleague from Arizona, John McCain, as the two served as moderate voices of conscience in Washington, DC. But in the years since McCain was first diagnosed with cancer, Graham’s role has changed. 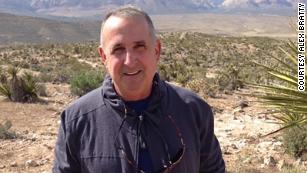 Richard N. BondHow, though, did he morph into former President Donald Trump’s chief lickspittle in the US Senate, who just this past weekend headed down to Mar-a-Lago to discuss the Republican Party’s future?One could speculate endlessly about the reasons: his desire to avoid a Trump-inspired primary against him in 2020, potential presidential aspirations, etc. But I think it’s far simpler: as a political opportunist, Graham has placed his desire for power above his own professed standards of decency.First elected to the US House of Representatives in 1994, Graham is now serving his fourth term in the US Senate. He famously became an ally of McCain, joining him in bipartisan outreach on issues such as campaign finance reform and immigration, even though it earned him the nickname “Lindsey Grahamnesty” from the late-conservative radio host Rush Limbaugh.Graham briefly sought the 2016 Republican nomination for president, before dropping out in late 2015. He even admitted publicly that he voted against Trump in the 2016 general election.And during the 2015-2016 election cycle, Graham was one of Trump’s fiercest and most colorful critics, calling him a “nutjob” and a “jackass.” But he didn’t stop there. The same month Graham dropped out of the race, he told CNN, “You know how to make America great again? Tell Donald Trump to go to hell … He’s a race-baiting, xenophobic, religious bigot. He doesn’t represent my party. He doesn’t represent the values that the men and women who wear the uniform are fighting for.”

‘Lapdog Lindsey’: Lemon speaks on the evolution of Lindsey Graham 02:21He later tweeted that if Trump secured the Republican nomination, “we will get slaughtered in November 2016. And frankly, we will deserve it.”

Our free Provoke/Persuade newsletter compiles the week’s most thought-provoking pieces and delivers them straight to your inbox.SIGN ME UPBy subscribing you agree to ourprivacy policy.Graham may have been wrong about the 2016 election outcome, but his predictions about Trump’s unfitness for office, bungling policy issues and tearing the Republican Party apart were sadly prophetic.Still, despite his long-running protestations and in the face of Trump’s manifest incompetence, Graham changed his tune shortly after a March 2017 meeting with Trump, during which the two enemies seemingly settled their differences. Graham issued a statement saying: “I had a great lunch meeting with President Trump today. He is strongly committed to rebuilding our military which is music to my ears. President Trump is in a deal-making mode and I hope Congress is like-minded.”Later that year, Graham acknowledged the reason behind his pro-Trump shift to Politico, stating, “If you know anything about me, it’d be odd for me not to do this … This is to try and be relevant.”At its noblest, Graham’s quest for “relevancy” could be the same impulse that propelled Trump administration figures, such as former chief of staff John Kelly, to remain in their jobs in an effort to prevent Trump from acting on his worst impulses.

Lindsey Graham: I’m worried about GOP’s chances in 2022 02:52At its crassest, Graham’s quest symbolizes the price good men and women pay when they try to maintain — and even expand — power.Sadly, Graham’s about-face seems to place him squarely in the quest for power category. Just consider that he went from, “I think he’s (Trump) a kook. I think he’s crazy. I think he’s unfit for office,” in 2016, to “What concerns me about the American press is this endless, endless attempt to label the guy some kind of kook not fit to be President,” in 2017.Really, Sen. Graham?Since Trump’s 2020 loss, Graham has embraced the former president to a degree that surpasses even Texas Sen. Ted Cruz and Missouri Sen. Josh Hawley, who both challenged the 2020 election results on January 6. In fact, Graham was one of the first senators to spend time with Trump after the January 6 riot. And, during the recent impeachment trial, Graham (along with Cruz and Utah Sen. Mike Lee) met with Trump’s defense team, despite the fact that they were supposed to serve as impartial jurors.Graham then endorsed Trump’s daughter-in-law, Lara Trump, for the vacant US Senate seat in neighboring North Carolina. Predictably, one of the current GOP Senate candidates for the seat, former three-term Rep. Mark Walker, pushed back: “In the words of, I believe it was John Ashcroft, Lindsey is always confident but not always right.”Additionally, Graham condemned Senate Minority Leader Mitch McConnell’s blistering critique of Trump following the impeachment trial saying, “He (McConnell) got a load off his chest obviously. But unfortunately, he put a load on the back of Republicans.”

This past weekend, Graham said he discussed with Trump an “America first agenda that can help unite the party.” But what did Trump say? His price was likely to continue to perpetuate the “big lie” that he won the 2020 election.McConnell knows the price is too high, and back in 2015, Graham did, too: “I’d rather lose without Donald Trump than try to win with him.” Regrettably, it appears that Graham has left the building, and instead, we’re left with this version: “Trump-plus is the way back in 2022.”In his Senate eulogy of McCain, Graham said: “Honor is, in my view, doing the right thing at your own expense. And he (McCain) did that time and time again.” If only Graham would heed those words.

“Bagel Dogs for the Chosen People” Offered to Jewish Soldiers to...