There’s just so much ugly garbage to sift through before you can make a decision.
But I’m qualified for the dirty job. I fact checked every word uttered by this President from his inauguration day in January 2017 until September 2020 — when the daily number of lies got so unmanageably high that I had to start taking a pass on some of his remarks to preserve my health.
Trump got even worse after November 3. Since then, he has spent the final months of what has been a wildly dishonest presidency on a relentless and dangerous lying spree about the election he lost.
As the country grapples with the deadly consequences of this deception, I’ve selected the 15 Trump lies that stand out to me from his four years in power — for their importance, for their egregiousness, for their absurdity, or for what they say about the man.
The most telling lie: It didn’t rain on his inauguration
Trump began his presidency by lying about the weather.
It rained during Trump’s inaugural address. Then, at a celebratory ball later that day, Trump told the crowd that the rain “just never came” until he finished talking and went inside, at which point “it poured.”
This was the first lie of Trump’s presidency. Like his lies that same week about his inauguration crowd, it hinted at what would come next.
The President would say things that we could see with our own eyes were not true. And he would often do this brazen lying for no apparent strategic reason.
The most deadly lie: The coronavirus was under control 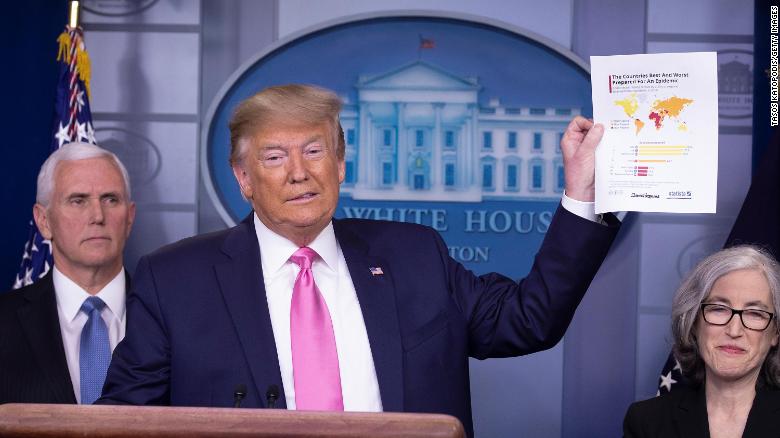 Trump speaks at the beginning of a new conference with members of the coronavirus task force, February 26, 2020 in Washington, DC. Trump updated the American people about what his administration’s ‘whole of government’ response to the global coronavirus outbreak.
This was more like a family of lies than a single lie. But each one — the lie that the virus was equivalent to the flu; the lie that the situation was “totally under control“; the lie that the virus was “disappearing” — suggested to Americans that they didn’t have to change much about their usual behavior.
A year into the crisis, more than 386,000 Americans have died from the virus.
We can’t say with precision how the crisis would have unfolded differently if Trump had been more truthful. But it’s reasonable to venture that his dishonesty led to a significant number of deaths.
The most bizarre lie saga: Sharpiegate 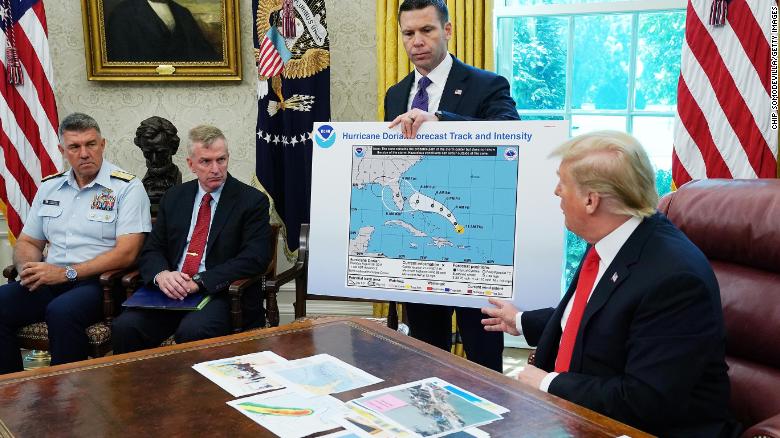 Trump references a map held by acting Homeland Security Secretary Kevin McAleenan while talking to reporters about Hurricane Dorian in the Oval Office at the White House September 4, 2019 in Washington, DC.
Trump tweeted in 2019 that Alabama was one of the states at greater risk from Hurricane Dorian than had been initially forecast. The federal weather office in Birmingham then tweeted that, actually, Alabama would be unaffected by the storm.
Not great, but fixable fast with a simple White House correction. Trump, however, is so congenitally unwilling to admit error that he embarked on an increasingly farcical campaign to prove that his incorrect Alabama tweet was actually correct, eventually showcasing a hurricane map that was crudely altered with a Sharpie.
The slapstick might have been funny had White House officials not leaped into action behind the scenes to try to pressure federal weather experts into saying he was right and they were wrong. The saga proved that Trump was not some lone liar: he was backed by an entire powerful apparatus willing to fight for his fabrications.
The most ridiculous subject of a lie: The Boy Scouts
When I emailed the Boy Scouts of America in 2017 about Trump’s claim that “the head of the Boy Scouts” had called him to say that his bizarrely political address to the Scouts’ National Jamboree was “the greatest speech that was ever made to them,” I didn’t expect a reply. One of the hardest things about fact checking Trump was that a lot of people he lied about did not think it was in their interest to be quoted publicly contradicting a vengeful president.
The Boy Scouts did. A senior Scouts source — a phrase I never expected to have to type as a political reporter in Washington, DC — confirmed to me that no call ever happened.
Yep, the President of the United States was lying about the Boy Scouts.
The ugliest smear lie: Rep. Ilhan Omar supports al Qaeda
At a White House event in 2019, Trump grossly distorted a 2013 quote from Rep. Ilhan Omar to try to get his supporters to believe that the Minnesota Democrat had expressed support for the terrorist group al Qaeda.
Trump went on to deliver additional bigoted attacks against Omar in the following months. But it’s hard to imagine a more vile lie for the President to tell about a Muslim official — who had already been getting death threats — than a smear that makes her sound pro-terrorist.
The most boring serial lie: The trade deficit with China used to be $500 billion 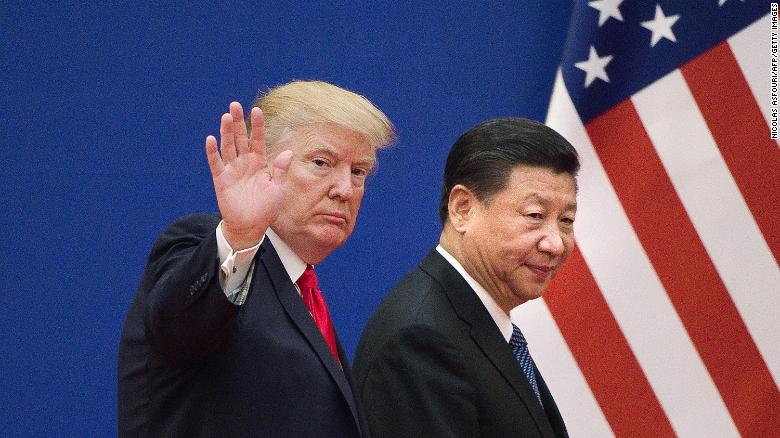 US President Donald Trumpand China’s President Xi Jinping leave a business leaders event at the Great Hall of the People in Beijing on November 9, 2017.
Trump, an incorrigible exaggerator, rarely chose to use an accurate number when he could instead use an inaccurate bigger number. So he said well over 100 times that, before his presidency, the US for years had a $500 billion annual trade deficit with China — though the actual pre-Trump deficit never even reached $400 billion.
Trump made versions of the “$500 billion” claim so many times that it became almost physically painful for me to fact check it any more.
The most traditional big lie: Trump didn’t know about the payment to Stormy Daniels
We’ve established that Trump was not your traditional political liar. One of his distinguishing features is that he lied pointlessly, dissembling about trivial subjects for trivial reasons.
But he also lied when he needed to. When he told reporters on Air Force One in 2018 that he did not know about a $130,000 payment to porn performer Stormy Daniels and that he did not know where his then-attorney Michael Cohen got the money for the payment, it was both audacious — Trump knew, because he had personally reimbursed Cohen — and kind of conventional: the President was lying to try to get himself out of a tawdry scandal.
The biggest lie by omission: Trump ended family separation
Much of Trump’s lying was clumsy, half-baked. Some of it was almost art. Here’s what he told NBC’s Chuck Todd in 2019 about his widely controversial policy of separating migrant parents from their children at the border: “You know, under President Obama you had separation. I was the one that ended it.”
Yes, Trump signed a 2018 order to end the family separation policy. What he did not mention to Todd is that what he had ended was his own policy — a plan announced by his own attorney general that had made family separation standard rather than occasional, as it had been under Obama.
All of Trump’s words in those two sentences to Todd were accurate in themselves. But he was lying because of what he left out.
The most shameless campaign lie: Biden will destroy protections for pre-existing conditions
Trump’s re-election campaign was consistently and consciously dishonest, especially in its attempts to cast Joe Biden as a frightening radical. When Trump claimed in September that Biden would destroy protections for people with pre-existing health conditions — though the Obama-Biden administration created the protections, though the protections were overwhelmingly popular, though Biden was running on preserving them, and though Trump himself had tried repeatedly to weaken them — Trump was not merely lying but turning reality upside down.
The lie he fled: He got Veterans Choice
Trump could have told a perfectly good factual story about the Veterans Choice health care program Obama signed into law in 2014: it wasn’t good enough, so he replaced it with a more expansive program he signed into law in 2018.
That’s not the story he did tell — whether out of policy ignorance, a desire to erase Obama’s legacy, or simply because he is a liar. Instead, he claimed over and over — more than 160 times before I lost count — that he is the one who got the Veterans Choice program passed after other presidents tried and failed for years.
And why not stretch? He knew he probably wouldn’t be challenged by a press corps drowning in other Trump drama. It wasn’t until August 2020 that he was asked about the lie to his face.
He promptly left the room.
The Crazy Uncle lie award: Windmill noise causes cancer 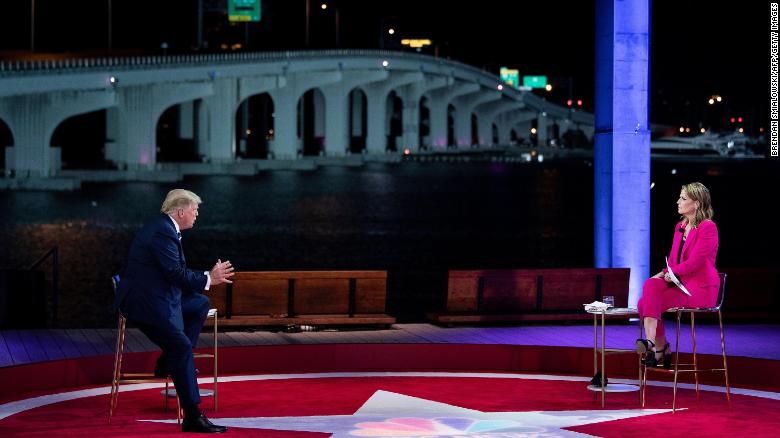 Trump gestures as he speaks during an NBC News town hall event moderated by Savannah Guthrie at the Perez Art Museum in Miami on October 15, 2020.
It was a problem for the country that the President was not only a conspiracy theorist himself but immersed in conspiracy culture, regularly stumbling upon ludicrous claims and then sharing them as fact.
For such a fierce critic of the media’s use of anonymous sources, Trump sure liked to use a lot of unnamed sources himself. His stories were full of nonsense he attributed to “people” or that he claimed “they” say. One of the most bonkers “they say” items: his 2019 declaration that “they say” the noise from windmills “causes cancer.”
After Trump amplified another conspiracy lie in 2020, NBC’s Savannah Guthrie admonished him by saying that “you’re not, like, someone’s crazy uncle who can just retweet whatever.”
Except he was, until Twitter took down his account.
The most hucksterish lie: That plan was coming in two weeks
Trump’s big health care plan was eternally coming in “two weeks.” So were a bunch of other plans and announcements.
Trump is, at his core, a huckster. Every moment of his presidency was a chance for him to sell someone on something, whether or not that something actually existed. And if they asked when they could actually see the magic elixir he said was being brewed just over there behind the curtain, he would just have to delay them until they forgot about it.
The most dangerous lie: Trump won the election
Trump’s long White House campaign against verifiable reality has culminated with his lie that he is the true winner of the 2020 presidential election he clearly, certifiably and fairly lost.
To many of us, it’s ludicrous nonsense. But to millions of deluded Americans, it’s the truth. And it has now gotten people killed.
The nation’s truth problem, clearly, isn’t just a Trump problem. With this last blizzard of deception and the Capitol insurrection it fomented, Trump has shown us, once more, just how detached from reality much of his political base has become — or always was.
https://www.cnn.com/2021/01/16/politics/fact-check-dale-top-15-donald-trump-lies/index.html
Liked it? Take a second to support Associate Editor on Patreon!

Welcome to Our Website
Welcome to WPBot
×
MORE STORIES

Can I just say: Ashli Babbitt is the culprit responsible for...