Dr. Karen Landers, an assistant state health officer in Alabama, said it was clear her state needed to turn around its Covid-19 vaccination program on the day in early January when its telephone hotline got a few more calls than expected.

The state had set up the hotline to receive as many as 165 calls at a time, she said, but on the first day, it reported getting 1.1 million calls, quickly overwhelming the system and drawing scrutiny from local media.

“People weren’t getting serviced and couldn’t get their appointments made,” Landers said. “Even though we were trying to provide all the information we could on social media and other ways, we realized that wasn’t satisfactory to the people of Alabama.”

The picture nationwide showed a yawning gap between some states that were doing well and others that were lagging far behind, Alabama among them. 0:07 2:05  KAMALA HARRIS TALKING TO 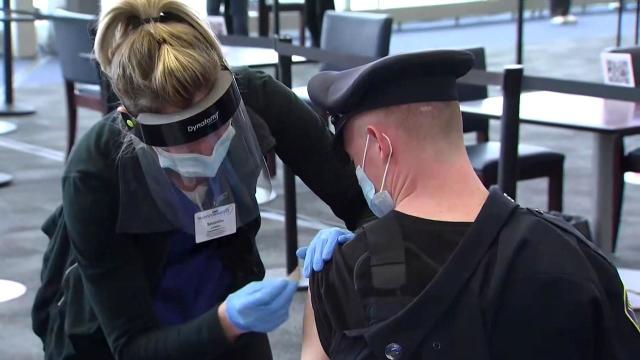 But in the weeks since, that gap has significantly narrowed. While a few states are outliers on either end, the vast majority of states are now at roughly the same level, according to an NBC News analysis of state vaccination data. Of the 50 states, 44 have administered 70 percent to 90 percent of the doses that have been distributed to them.

In other words, a smaller proportion of doses are going unused on freezer shelves, and states are clustering around a national average of having used 79 percent of doses given to them.

In interviews, medical experts, public health officers and elected officials in some of the best and worst performing states described what they saw as some of the differences in how they’ve performed — and gave suggestions for how some lagging states could catch up, with the help of the Biden administration.

In the states that have outperformed the average, state authorities have often taken a strong hand in organizing local efforts, moved quickly to get the public signed up to participate and leaned on nearby federal institutions for help.

Alabama is still a bit behind other states, having used 65 percent of its doses as of last week, but Landers said the state has been able to gain ground after putting aside many other public health responsibilities to concentrate on Covid-19 vaccinations. Alabama pulled food safety employees to help organize vaccination clinics, she said. They temporarily reassigned nurses and medical staffers who normally work on family planning, routine vaccinations and tuberculosis control. And she said they even used government health employees who usually work on permitting sewage disposal at construction sites and those who respond to animal nuisance complaints.

Like other states that have improved their vaccination rates over the past month, Alabama launched mass vaccination clinics capable of administering thousands of doses each day, depending on when supply is available. Landers said the department’s staff worked on the Martin Luther King Jr. Day holiday, and had planned to work on the Presidents’ Day holiday last week, but many were sidelined by extreme weather that swept through much of the country.

“You had to just adapt with the public health staff that you have,” Landers said. “And many of these people have been here a long time, so they’re able to adapt.”

There are different ways to measure how a state’s vaccination effort is doing. One is to look at the proportion of the state’s population that’s been vaccinated, or the number of vaccines administered per 100,000 people.

By that measure, a few states including Alaska, New Mexico and West Virginia have consistently been among the best in per-capita vaccinations in recent weeks. As of Thursday, Alaska had administered nearly 18,000 initial doses per 100,000 people.

A handful of other states have often traded places near the other end of the scale, and they include Alabama, Kansas, Missouri and others.

Experts in those states said they believed a variety of factors were holding them back, such as a potentially higher degree of hesitancy about the Covid-19 vaccines and the decisions that state and local officials have made about both who gets prioritized and which providers are administering the shots.

Dr. Mary Anne Jackson, a pediatric infectious diseases expert and dean of the medical school at the University of Missouri-Kansas City, said state and local officials would need to do more to convince people in several groups that the vaccines are safe and effective.

“The confidence and convenience issues are creating some of the vaccine hesitancy, particularly in some communities such as rural residents, Black adults and essential workers,” Jackson said.

To boost confidence, she said, people need to see more community leaders taking the vaccines or talking about the benefits.

But she said there’s also a question of convenience. Missouri has opened mass vaccination sites throughout the state’s different regions, which may help suburban residents but “that’s not going to make it for our rural residents and our Black and Hispanic residents,” she said. Those communities, she said, may need smaller, targeted clinics. The Biden administration has been moving closer to that approach, seeking to prioritize vaccinating people in vulnerable communities and even providing support to vaccination sites in churches.

“In order to build vaccine confidence, we need transparency and clarity of communication on how many doses we have and where those doses are going. And to a certain extent, our state has not been perfect,” Jackson said.

Missouri Gov. Mike Parson, a Republican, has faced criticism that he has short-changed the St. Louis region on vaccine supply, favoring the state’s rural areas. Parson’s office did not respond to a request for an interview but told local media this month that there was no bias.

“We look at geography and population, but we also look at where our elderly populations are and they are more commonly in rural areas,” he said.

Michael Kinch, a biochemistry professor at Washington University in St. Louis and director of the university’s Center for Drug Discovery, said there appeared to be a correlation between vaccine distribution and the state government’s overall approach to the pandemic.

“This is one of the few states in the union that has no mask mandates at the state level,” Kinch said.

Another way to look at progress is a state’s vaccine utilization rate, or the number of doses delivered to a state compared to the number that make it into people’s arms. Many states have been unable to administer the doses they already have on hand.

Those numbers show marked improvement across the nation over the past several weeks. Alaska’s dose utilization rate was at 27 percent at the start of January, and increased to 62 percent at the end of the month and currently hovers above 70 percent, according to CDC data posted on Thursday.

West Virginia’s utilization rate stood out as high in the beginning of January, at nearly half its available doses, and it has gone higher. On Valentine’s Day, the state reached 98 percent utilization. New Mexico has used nearly all of its on-hand doses with 99 percent of its doses used.

State leaders in New Mexico and Alaska credit their high inoculation rates to the centralization of their public health systems.

The existence of an already operational public health framework with logistical infrastructure meant that Alaska did not undergo the same Herculean effort that some states have confronted.

Alaska has long had to maintain a top-down model in public health because of the logistical hurdles that it faces due to the lack of easy road access and environmental extremes many of its towns and villages face. The state government has also maintained a close working relationship with Indian Health Services — a federal agency that has its own allotment of shots — to vaccinate Alaska’s native communities.

Another boon: The state receives its vaccine allotment monthly, rather than weekly, from the federal government. That small difference makes it easier for officials to plan their distribution to providers and get a head start.

“This is a system that’s been set up and we’ve been running for years. This isn’t new to Covid: it’s just a well-oiled machine,” said Tessa Walker Linderman, the lead for Alaska’s Covid Vaccination Task Force. “I think just because of the unique challenges of distribution of really anything in our state, the systems have already been in place and we’re just operationalizing for Covid what we’re already doing day in and day out to get supplies, food and health care out to various parts of the state.”

New Mexico, meanwhile, had more to stand up before it had a streamlined process. The biggest difference-maker in its effort, state leaders said, was the user-friendly website New Mexico set up as well as the data-gathering practices it has implemented to support it.

The state quickly released its website, created by the development company Real Time Solutions, and encouraged New Mexicans to create a user profile on it as soon as possible — regardless of their vaccine eligibility. Users could then be notified as soon as they were able to get a vaccine, and of the nearest provider who has doses available.

The site launched in December, weeks ahead of similar efforts in states such as California.

The website is also backed up by a call center with more than 30 operators who help those who aren’t technologically savvy. Providers, meanwhile, feed in data on the back end, including whether they have doses available because of cancellations or other reasons. The system then notifies people nearby of vaccine availability. So far, more than 40 percent of New Mexico’s population has signed up.

New Mexico Gov. Michelle Lujan Grisham, a Democrat, said in an interview that data has been key in their fight to get as many people inoculated as possible and that, prior to the Biden administration, they’d had to go it alone. The Trump administration did not do enough to put these systems in place, she said.

“The Biden team is still having to figure it out,” she said. “The Trump administration set it up so poorly, if at all. Nobody ever invested in these comprehensive data systems, and for epidemiology — for real population health — you have to be able to turn that on and off or adjust it on a dime. And we’ve done that sort of by the seat of our pants, by our bootstraps, put all this stuff together.”

Dr. Tracie Collins, the New Mexico health secretary, said the state has had a “unified command structure,” including twice-a-week “office hours” for hospitals or other vaccine providers to check in with state authorities, share information and work through logistical problems.

New Mexico also benefits from having access to the Los Alamos National Laboratory, a major Department of Energy research institution that has helped the state with case modeling — a huge boon for the state, officials said.

But more than anything, providers said the effort to maintain focus on putting shots in arms, drained of politics, has helped move the state forward.

“There is a single goal, and that is to get the most people vaccinated in the shortest amount of time,” said Kate Becker, the CEO of University of New Mexico Hospitals. “Having that sort of clear objective really helped everybody just kind of circle around and say, ‘OK, we all want to get this done, we all want to get past this, so what are the things we need to do to achieve that goal?’”

Half of unvaccinated workers say they’d rather quit than get a...