By Barbara Starr and Caroline Kelly

Military officials overseeing the authorization process to launch nuclear weapons were unaware on January 6 that then-Vice President Mike Pence’s military aide carrying the “nuclear football” was potentially in danger as rioters got close during the violent Capitol insurrection, according to a defense official.

The vice president is always accompanied by a backup of the “football,” which contains the equipment to carry out orders to launch a nuclear strike. It must be ready at all times and is identical to what the president carries, in case he becomes incapacitated.
US Strategic Command became aware of the gravity of the incident after seeing a video played at the Senate impeachment trial Wednesday showing Pence, his Secret Service agents and a military officer carrying the briefcase with classified nuclear launch information running down a flight of stairs inside the Capitol to get to safety, the official said. 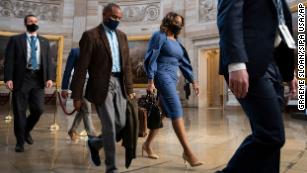 “As the rioters reached the top of the stairs, they were within 100 feet of where the vice president was sheltering with his family, and they were just feet away from one of the doors to this chamber,” Del. Stacey Plaskett, one of the impeachment managers, explained in the senate trial on Wednesday. In one video, the crowd can be heard chanting “Hang Mike Pence” as they stand in an open doorway of the Capitol.
It is not clear if other national security elements of the government such as the National Security Council or top officials at the Pentagon were aware of the gravity of Pence’s position and those of his team.
On January 6 the military officer was able to maintain control of the backup “football” at all times and the President was inside the White House, the official said. Even if the rioters had gotten hold of it, they could not have used any of the information because of the security controls on the system, the official said.
Since they never lost control of the “football” and then-President Donald Trump was safe, they didn’t have to deactivate Pence’s system. But the incident raises the question of whether the “football’s” status was sufficiently accounted for at all times.
“The risk associated with the insurrectionists getting their hands on Pence’s football wasn’t that they could have initiated an unauthorized launch. But had they stolen the football and acquired its contents, which include pre-planned nuclear strike options, they could have shared the contents with the world,” Kingston Reif, an expert on nuclear weapons policy at the nonpartisan Arms Control Association, told CNN.
“Such an outcome would have been a security breach of almost incomprehensible proportions,” Reif added. “And it ought to raise further questions about the rationale for the anachronism that is the football.”
The Pentagon has declined to comment on the Pence video because of the sensitivity surrounding nuclear weapons issues. The National Security Council also declined to comment.
“I would not get into discussion about specific command and control over nuclear strategic forces,” Pentagon press secretary John Kirby told reporters. The Defense Department inspector general has been conducting a review of the events on January 6, but it’s not publicly known if the “football” is included in that probe. 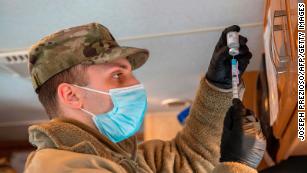 The video of Pence and the aide in charge of the football was included in House impeachment managers’ presentation Wednesday, which featured never-before-seen Capitol security camera footage, body camera footage from Washington police and police radio dispatches. The presentation provided the fullest view to date of how the Capitol had been overrun and the grave threat the rioters had posed to everyone in the Capitol, including the senators now acting as the jury in Trump’s impeachment trial.
The videos included footage of police officers being beaten by the rioters as well as images depicting just how close the mob inside the Capitol had come to reaching lawmakers. The House managers showed security footage of senators fleeing their chamber, with Capitol Police officers between them and rioters just steps away.