Rep. Cori Bush, a prominent Black Lives Matter activist elected to Congress in November, remembers the hate-filled stares and the mental and physical abuse she and others endured from police officers while protesting in Ferguson, Mo., in 2014 and 2015. But she also says she was villainized by many in the community simply for standing up for Black lives after the shooting death of 18-year-old Michael Brown Jr., a Black teen, by a white police officer.

“People were calling us terrorists for saying Black Lives Matter,” Bush, who is from St. Louis, told Yahoo News in a video interview this month. “People were telling us, ‘Oh, get a job. … You just want to have something to complain about.’ … No. We wanted to stop Black death at the hands of police.”

On Jan. 3, Bush took her oath of office and became the first Black congresswoman in Missouri’s 200-year history as a state. It was her third run since the death of Brown, and she credits the protests in Ferguson with helping her realize her goal of bringing her activist passion to the halls of Congress.

Bush, 44, represents a new wave of progressive politicians in Congress, along with freshman congressman Jamaal Bowman and other more seasoned members of “the Squad,” who don’t shy away from the passionate rhetoric often heard at street marches in the communities they represent.https://www.yahoo.com/nel_ms/_rcv/remote?m_id=web-3d-launch&ctrl=Embed&m_mode=document&slug=blm-timeline-carousel-181043439

During the Brown protests in 2014, Bush was working as a registered nurse and pastor in St. Louis when she started demonstrating in Ferguson. With each successive day that she protested in the streets, she says, she hoped justice would be served.

“I felt like if I kept going back, I would see justice,” Bush said. “[I kept thinking,] I didn’t get it today, so let me go back tomorrow.”

It was out in the streets while protesting for Brown in late 2014 that Bush was introduced to the phrase “Black Lives Matter.”

“I remember one day I’m standing out on the street and we’re protesting and someone drove up in a vehicle and handed me a poster out of their car, and it said ‘Black Lives Matter’ on it,” Bush recalled.

Bush’s father, Errol, is an alderman and a former mayor of Northwoods, a small city in St. Louis County. Growing up, she watched him run for office every couple of years and initially told herself she had no interest in following his footsteps. But after Ferguson, something changed.

“When I was asked by an activist, who has since been murdered, to run for office, initially I said no,” Bush recalled. “But then when I thought about it, how did we get the heart of the people that were out there on the ground for more than 400 days in rain, sleet, hail, snow, hell no, we won’t go? How do we get that heart after they were beat up, beat unconscious, arrested and then made it back out there to the street? How do we get that heart, that love, for the community into federal office? The only way to do it is to run.”

Patrisse Cullors, one of the founders of the Black Lives Matter movement, said Bush’s persistence is one of her most appealing qualities, telling Yahoo News that she “exemplifies what it means to be a leader, a protest leader, an organizer, and taking the seat and not stripping away where she came from.”

“She continues to show up over and over again, reminding everybody that not only is she a proud Black woman, but that she is from St. Louis and she represents the most marginalized people of St. Louis,” Cullors added. 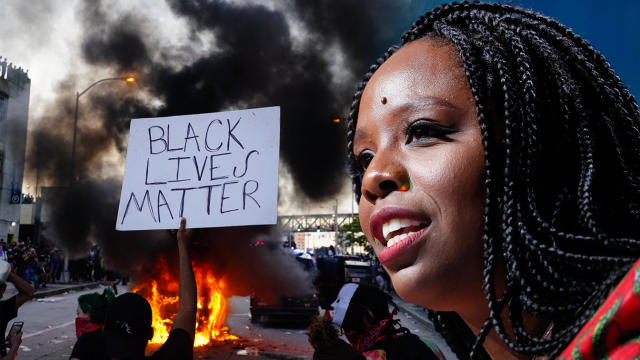 For many Americans, the Black Lives Matter movement — which was founded nearly eight years ago — has become the political, spiritual and cultural locus of the unheard. “The power of Black Lives Matter has really been about being able to both be a protest movement and a movement that’s deeply involved in politics,” Patrisse Cullors, one of the organization’s co-founders, told Yahoo News in an interview this month.

But three days after Bush was sworn in, a mob of Trump supporters stormed the U.S. Capitol to try to prevent Joe Biden from being certified the winner of the 2020 presidential election. Bush said she feels as though that violent insurrection could have happened at any time in American history, and it took her right back to Ferguson.

“My team and I were locked down in our office,” she said. “I never felt like I was about to die or that I could die in that situation. What I felt like was, ‘I’m ready like this. This is what we’ve been doing out there on the ground.’ … I’m thinking to myself, ‘I’m ready.’”

In many ways, Bush epitomizes the Black Lives Matter movement. In 2014 she protested in the streets on behalf of Black lives, and in 2021 she continues to fight for Black lives in Congress.

“This is work and relationships and infrastructure that’s been built for generations,” Ash-Lee Woodard Henderson, a Movement for Black Lives activist, Highlander Research and Education Center co-executive director and a leader with the Frontline, told Yahoo News. “[With Bush in office], it makes it possible that we actually can demand again what we deserve. Which is to expel the members of this treasonous caucus that were working and colluding with white supremacists to stop this transition of power.”

Black Lives Matter isn’t slowing down, but neither are those who are opposed to it. Rep. Marjorie Taylor Greene, a Georgia Republican who has expressed sympathy for the conspiracy theory group QAnon, was elected to Congress in the same cycle as Bush.

The two outspoken politicians had a much-publicized confrontation in January over Greene’s refusal to wear a mask in a public space in a House office building. “She targeted me & others on social media,” Bush tweeted. “I’m moving my office away from hers for my team’s safety.”

A Greene spokesman later accused Bush of being the instigator and released a video of Greene on the phone without a mask and someone, allegedly Bush, yelling at her to follow the rules and put a mask on.

The dispute over masks belies a larger conflict, Bush said, and one she’s prepared to keep fighting.

“If they choose not to love, respect, honor and fight for humanity,” Bush said, “they need to find another job.”

Pence knows truth about Trump, but will he tell all?

Black Army Lt. pulled over, terrorized, and beaten even though police...