With just one week until President-elect Joe Biden‘s inauguration, federal law enforcement agencies are launching a massive security initiative as they brace for more violence after a mob of Trump supporters laid siege to the Capitol last week.

Still, the inauguration is set to proceed as scheduled with several high-profile security precautions in place, including enhanced National Guard presence and ramped-up law enforcement by state and local officials. President Trump also declared a state of emergency in Washington, citing the “emergency conditions” of Biden’s inauguration.

Despite heightened alarm about further violence, Biden told reporters that he intends to carry on as planned with the event. The inauguration’s theme is “America United.”

“I’m not afraid of taking the oath outside,” Biden said Monday.

Officials increase the number of National Guard members who will be deployed in Washington during the presidential inauguration from 15,000 to 20,000 on Wednesday, about three times the number of U.S. troops currently deployed to Iraq and Afghanistan combined. The inauguration comes exactly two weeks after insurrectionists stormed the Capitol. Five people, including a U.S. Capitol Police officer who was beaten with a flag pole, died in the unprecedented attack.

Public access to the inauguration, which was already scaled back as a result of the coronavirus pandemic, will be further limited. City officials are erecting a perimeter throughout downtown, putting up barriers around the White House, the National Mall and the Capitol. In order to travel through the perimeter, people will need to provide proof of essential purpose.

“The FBI received information about an identified armed group intending to travel to Washington, DC on 16 January,” the memo, a copy of which was obtained by ABC News, read. “They have warned that if Congress attempts to remove POTUS via the 25th Amendment, a huge uprising will occur.” 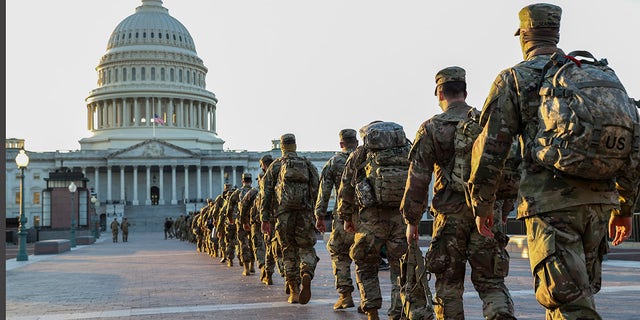 Members of the U.S. National Guard arrive at the U.S. Capitol on Jan. 12, 2021 in Washington, DC. The Pentagon is deploying as many as 15,000 National Guard troops to protect President-elect Joe Biden’s inauguration on January 20, amid fears of new violence. (Tasos Katopodis/Getty Images)

With COVID-19 cases surging nationwide and growing fears about the safety of the event, the leaders of Maryland, Virginia and the District of Columbia issued a joint statement urging Americans to stay away from the inauguration and instead tune in virtually.

“We will work together, and with our partners in the federal government, to ensure the safety of the National Capital Region,” they wrote. “Due to the unique circumstances surrounding the 59th Presidential Inauguration, including last week’s violent insurrection as well as the ongoing and deadly COVID-19 pandemic, we are taking the extraordinary step of encouraging Americans not to come to Washington.” 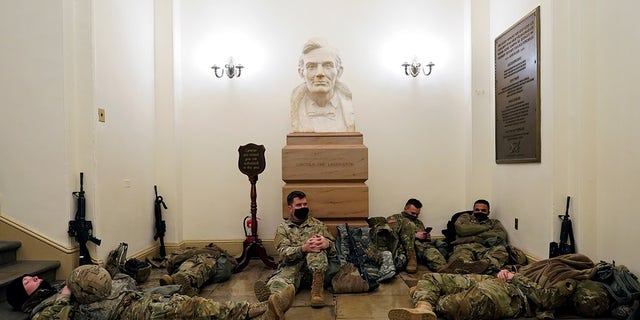 There will also be no public access to the Capitol grounds during the inauguriation, acting U.S. Capitol Police Chief Yogananda Pittman said in a statement on Monday. The Capitol Police, who have been heavily criticized after they were overrun by the far-right extremists last week, are working with federal, state and local law enforcement to ensure the inauguration goes smoothly, she said.

ROY BLUNT BALKS AT ATTEMPT TO IMPEACH TRUMP AGAIN: ‘NOT GOING TO HAPPEN’

“We have comprehensive, coordinated plans in place to ensure the safety and security of the congressional community and the upcoming presidential inauguration,” Pittman said.

The Washington Monument is also closed through Jan. 24 due to “credible threats to visitors and park resources” surrounding Biden’s inauguration, the National Park Service said. The threats include possible disruption to the “set-up and execution of inaugural events, which occur in several park areas,” the agency said.

Officials are fortifying the city days earlier than planned in anticipation of potential violence on Saturday. 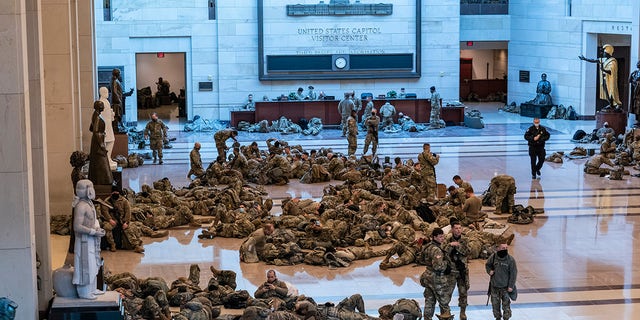 Hundreds of National Guard troops hold inside the Capitol Visitor’s Center to reinforce security at the Capitol in Washington, Wednesday, Jan. 13, 2021. The House of Representatives is pursuing an article of impeachment against President Donald Trump for his role in inciting an angry mob to storm the Capitol last week. (AP Photo/J. Scott Applewhite)

In a memo on Monday, the FBI warned that an armed group has threatened to come to Washington on Jan. 16 and stage a “huge uprising” if President Trump is removed from office before Jan. 20. The agency also warned that armed protests are being planned at all 50 state capitals and at the U.S. Capitol on Jan. 20, the day of Biden’s inauguration, regardless of whether the states certified electoral votes for Biden or Trump.

“There are people plotting to do danger, at least online, and the bottom line is our authorities have to be completely on top of it,” Senate Minority Leader Chuck Schumer told reporters this week.

House Democrats were briefed late Monday about threats to the event, including that thousands of armed pro-Trump supporters are plotting to surround the Capitol ahead of the inauguration, according to Rep. Conor Lamb, D-Pa.

“They were talking about 4,000 armed ‘patriots’ to surround the Capitol and prevent any Democrat from going in,” Lamb told CNN on Tuesday.

Rep. Tom Malinowski, D-N.J., who participated in the security briefing for lawmakers, told The Washington Post that if the extensive measures planned for the inauguration had been in place on Jan. 6, “a fly could not have gotten into the Capitol.”

Guest
AnybodybutHim
Share On FacebookShare On TwitterShare On Google

Guest
Thomas
Share On FacebookShare On TwitterShare On Google

No More Gaslighting Us on Religious Freedom

Planning For The Next Trump