Minnesota mom Sharon McMahon is combating misinformation online by educating her community of “Governerds” on Instagram.

(CNN)When Sharon McMahon scrolled through social media in the months leading up to last year’s presidential election, she found herself horrified by the amount of “straight misinformation” filling her feed.

“It was just shockingly wrong,” McMahon, a Minnesota mom of four, told CNN. “Like not even a little bit right.”
Armed with a passion for constitutional law, along with over a decade of government and law classroom teaching experience, McMahon decided she wanted to combat the mistruths with education.
She began posting videos of herself on Instagram, dispelling some of the myths she was seeing online and giving nonpartisan lessons on basic government principles, such as how bills are passed in Congress and how the Electoral College works.
“I really just wanted Facebook to sit down and shut up,” McMahon said with a laugh.
McMahon said she believes it’s people’s “innate desire to make sense of the world” that makes them latch on to anything, even if it’s “straight up lies on Twitter.”
While she said it’s easy to laugh at some of the more preposterous lies that circulate online, the “horrifying” January 6 insurrection proves how conspiracy theories can become a “real threat to national security.”
The mob of Trump supporters who stormed the US Capitol that January day included conspiracy theorists linked to QAnon and the Proud Boys — two right-wing extremist factions that President Donald Trump repeatedly refused to condemn during his election campaign last year.
It appears McMahon’s simple, straightforward “just the facts” approach to combating such lies is resonating.
In January, she said she heard from 10 people who revealed they used to believe some of the QAnon conspiracies until they came to her page.
“I understand that I can’t reach everybody,” she said. “But those 10 people are not going to be out there spreading misinformation anymore.”
And that, she said, is a win.

Growing a following of ‘governerds’ as ‘America’s government teacher’

When she first began posting her daily government lessons in late October 2020, she had been on Instagram for nine years and had amassed 14,000 followers.
In just four months, her account has grown to a community of 400,000, who have started calling themselves “governerds.” 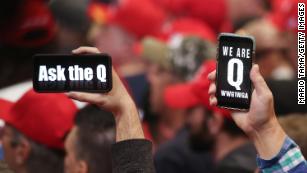 Less than 10% of Americans like QAnon
McMahon said the number of people flocking to her page gives her hope.
“There are people who are interested in facts, and who are interested in the truth, even if it’s not what they want to hear,” McMahon said.
That kind of influence, along with McMahon’s warm, humorous, and self-deprecating personality, could easily make her a social media influencer. Instead, she likes to call herself “America’s government teacher.”
The kind of government teacher who shares her favorite Amazon sweater finds, tells you about her husband’s recent kidney transplant and sometimes gives lessons in her bathrobe while putting on her makeup. 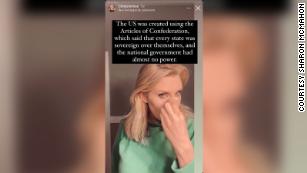 Meet the Minnesota mom fighting conspiracies one Instagram story at a time.
Also part of McMahon’s appeal is that she never reveals her political leanings, despite people constantly asking her. One follower even offered her $1,000 to tell him who she voted for. And unlike traditional media, she isn’t beholden to ratings and she isn’t trying to make money.
“I swear no allegiance, except fact, reason and human decency,” she said.
McMahon has given us reason to believe that, despite what the polarizing headlines might say, human decency abounds.
Since gaining so many followers, she has galvanized the “governerds” in philanthropic efforts that included a thank you letter writing campaign to the the Capitol cleanup crew, whose job it was to clean up the mess left behind the January 6 riot. 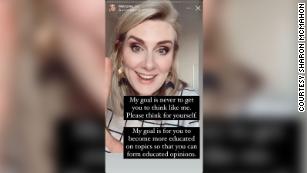 Meet the Minnesota mom fighting conspiracies one Instagram story at a time.
The community has also raised more than $700,000 in the last five months — more than $560,000 of which was raised just last week and will go to pay off more than $56 million in default medical debt through RIPMedicalDebt.com.
She said the generosity of her “governerds” is evidence that Americans are aligned on what matters.
“We all want very similar things of peace and prosperity and freedom,” McMahon said. “We want to help others and we just have differences of how we want to get there.”
Recently, McMahon was asked if she could invite anyone to dinner who would it be. In her typical bipartisan style, she said the late Justices Ruth Bader Ginsberg and Antonin Scalia, as well as former president George W. Bush and former first lady Michelle Obama.
She said these two sets of duos exhibit exactly what she hopes her lessons can teach: that it’s possible to disagree and still find affinity for one another.
“That’s what’s missing right now.”
Liked it? Take a second to support Associate Editor on Patreon!