Americans believe by hefty majorities that we can solve our national problems and that the federal government should play a major role in areas including infrastructure, health care, environment, poverty reduction and economy. This broad support provides a foundation for Joe Biden to become the most transformative president since Franklin D. Roosevelt. 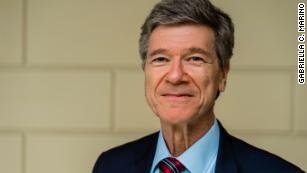 Jeffrey D. SachsBiden has the chance to lead a green and digital recovery that would create millions of good jobs supported by advanced 21st century technologies. Yet to succeed, Biden will have to come up with a program to pay for an expanded federal government.The US needs more federal spending to modernize and upgrade infrastructure — power, digital, roads, rail, coastlines, waterways — in order to create good jobs, protect the environment and avoid more natural disasters. The federal government also needs to reinvigorate our K-12 education, as America has fallen behind a number of other countries in math and science.The federal government needs to invest in new technologies such as advanced batteries for electric vehicles, 5G for digital services and cutting-edge photovoltaics for clean energy. And let us not forget, the federal government needs to support tens of millions of hard-working families squeezed by unaffordable health care, child care and tuition costs.Our country has put off those public investments for decades, ever since President Ronald Reagan ushered in an era of tax cuts. We can’t postpone those investments any longer.

Fortunately, there are some offsetting budget cuts. The US can safely cut the military budget by $200 billion, or around 1% of GDP, by closing hundreds of outmoded overseas military bases and by avoiding a new arms race in nuclear weapons. Incredibly, as a legacy of World War II, which ended 76 years ago, the US still has an enormous number of military bases around the world. In 2015, it was estimated to have 800 military bases in more than 70 countries.

Why Democrats may look back on the $1.9 trillion Covid relief bill with regretThe government can also save at least $200 billion a year in health care outlays. It’s absolutely ridiculous that Washington fails to negotiate drug prices with pharmaceutical companies and hospital prices with health care providers. In every other high-income country, the costs of health care are set or at least negotiated by government. In the US, they are set by monopolists, protected by patents or by large market shares in health care markets.With those cuts in military and health spending, the remaining cost of expanding government amounts to $600 billion, or 3% of GDP a year. That’s a completely manageable sum.Yet to some observers, such an expansion in government spending might seem out of the question. The last time it happened during peacetime was in the era of the New Deal and its aftermath, which stretched from 1933 (the start of FDR’s presidency) to 1968 (the end of Lyndon Johnson’s presidency). During that period, the public strongly supported the expanded role of the federal government and the Democratic Party that led it. Democrats held the White House for 27 of 35 years.

The New Deal epoch didn’t end because the public opposed the federal spending. It ended when millions of working-class White voters abandoned the Democratic Party because of the party’s pro-civil rights stance in the 1960s.Yet those White working-class voters paid a fearsome price for the chronic underinvestment in federal programs under Republican presidents and congressional leaders. The earnings of workers without professional or doctoral degrees has been stagnant for 20 years! With federal support for improved education, job training, digital infrastructure and other advanced technologies, job productivity, international competitiveness and living standards can be raised.While the anti-civil rights mood still animates the Trump wing of the Republican Party, it doesn’t command anything like majority support in the US. There is a broad recognition in the country that we need new federal spending to modernize and upgrade the economy, according to polling by Pew Research Center.Here then is America’s opportunity. We should expand the role of the federal government and find the extra tax revenues to support that increase. A bit more arithmetic can help us to set a target for tax increases.According to the Congressional Budget Office (CBO), the budget deficit in future years is expected to be around 4% of GDP. If we could trim that by one quarter, reducing it to 3% of GDP, we could prevent the debt from rocketing higher compared to size of the overall economy. Keeping the debt stable and also paying for that $600 billion in new spending will require higher taxes, amounting to 4% of GDP — 1% to cut the deficit and 3% to fund the new spending.Such an increase in taxes should not be very hard to achieve in view of the massive profits of corporations and the megawealth of America’s richest individuals. Over the past 50 years, corporate taxes have been cut dramatically — from nearly 4% of GDP to little more than 1% today. By reversing part of those corporate cuts, we could (and should) raise an additional $400 billion.

I love Texas but something’s wrongFor the other 2% of GDP, we should turn mainly to the richest Americans. Senators Bernie Sanders and Elizabeth Warren are rightly calling for a tax on ultra-wealth, starting at $50 million and above. It would raise an estimated $3 trillion over the next 10 years. The tax would hit only the wealthiest 0.1 % of households (the top 100,000 households out of America’s 121 million).There are many other good tax options to raise the remaining funds.These include a new tax on CO2 pollution to be paid by an income tax surcharge on Big Oil; a rise in the top wage limit on payroll contributions to Social Security; a rise in the top personal income tax bracket for the highest earners; and a financial transaction tax on stock market purchases and sales.President Biden is right to signal that he will follow his rescue package with a jobs and infrastructure package. The federal government will expand, as it did in the New Deal era, to create a society that is more prosperous, fair and sustainable.