Well, well, well. As the meme says, “shit just got real.” Trump’s legal counsel, the silver haired Wyatt Earp wanna be legal beagle Ty Cobb, just announced that all White House staff interviews “are over.” No matter how stupid you thought that attorney John Dowd was for saying that he actually wrote Trump’s brain dead tweet saying that he knew Flynn had lied when ht asked Jim Comey to back off, well, Ty Cobb jusr t saw-his-ten-and-raised-him-five.

I can only imagine Cobb put this out for His Lowness’ consumption, to show him how much of a hardass he was being in dealing with Mueller. On its face this makes absolultely no sense, since it is Cobb who has been counseling complete cooperation with Mueller, while Dowd has been preaching from the obstruction pulpit. But it’s also brain dead.

For one thing, Ty Cobb cannot tell White House staffers who they can talk to, and who they can’t. Ty Cobb is Trump’s lawyer, It is unethical for him to give legal advice to someone he is not representing, especially when that person could easily have a latent conflict of interest with his main client, Donald Trump’s best legal interests.

For another thing, Ty Cobb has nothing to say about it. Robert Mueller will decide when the interviews are over, not Ty Cobb. Robert Mueller is running an authorized investigation, and he has the right to interview anybody he feels relevant. But let’s just say, for the sake of argument, that all of these White House staffers comply with Cobb’s directive, and tell Mueller’s team to go and pound sand when they come a-calling. The Mueller team response? “OK, no problemo, here’s your grand jury subpoena.” Nothing to put people on edge like forcing them to make a decision between a voluntary, hopefully non confronatational interview in a scary room at the Justice Department, or a much scarier involuntary chat in a sealed grand jury room.

Why the sudden change in strategy? Personally, I believe it was the realization that Mueller is concentrating heavily on any conversations in the White House about Michael Flynn during that 18 day period when Sally Yates went over to tell Don McGahn that Flynn was compromised, and the day Flynn was fired/resigned. This can only mean that Mueller is trying to determine if Trump knew that Flynn had committed a felony in lying to the FBI in his interview when Trump asked Comey for a free pass for Flynn. That would be an open and shut case of obstruction of justice, and the GOP has enough problems already on their plate heading into 2018. Therefore, you try to shut off the information flow that can harm the Tangerine Tantrum.

Robert Mueller is not going to back off. He is going to continue contacting west wing staffers to schedule interviews. And if they decline to talk, he’s going to send an agent over to serve them with a grand jury subpoena. And when he does that, Trump is in a box.Either he will have to back down, something he never does, or he will have to move against Mueller and attempt to fire him. And if he does that, then we will have a full blown constitutional crisis, and just in time for the 2018 elections. 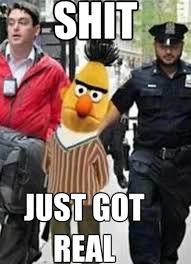 Liked it? Take a second to support Joseph "Murfster35" Murphy on Patreon!