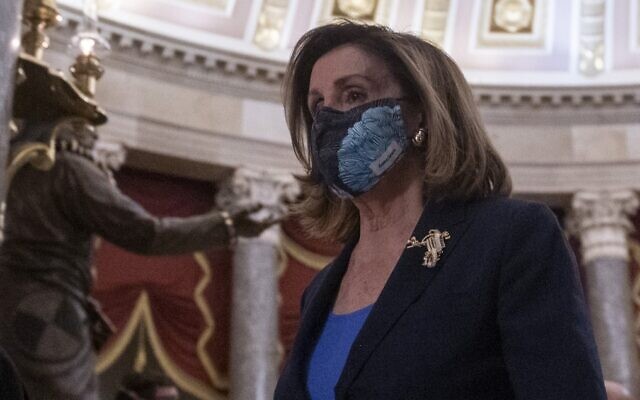 US House Speaker Nancy Pelosi walks through the Capitol in Washington on January 12, 2021. (Andrew Caballero-Reynolds/AFP)

US House Speaker Nancy Pelosi on Tuesday quoted an Israeli poet and songwriter as she urged Republican lawmakers to back the removal of US President Donald Trump from office over his supporters’ storming of the Capitol last week.

Pelosi quoted Ehud Manor’s poem “I Have No Other Land” (“Ein Li Eretz Aheret” in Hebrew) during a floor speech as the House of the Representatives debated a bill calling for US Vice President Mike Pence to invoke the 25th Amendment.

Pelosi, a San Francisco Democrat, hailed Ehud Manor as a “great Israeli poet” and said she has previously recalled his poem during Trump’s presidency.

Pelosi also quoted the poem, which was later made into a song, during her speech to the J Street conference last year.

Written in 1982 when a right-wing Likud government was waging a controversial war in Lebanon, the song speaks of Manor’s love for Hebrew but features a pledge to “not remain silent and sing” to a country that “has changed its face.” Manor’s widow, Ofra Fuchs, said in 2015 that it was intended as a left-wing protest song.

https://www.timesofisrael.com/i-cant-keep-silent-pelosi-quotes-israeli-poet-to-urge-trump-removal/?fbclid=IwAR2yARoMMdR1LWODIaEjfiEE0GurBN0EoAY89GyyweOUXD9RbtCUsFVNlyU
Thank you to all who already support our work since we could not exist without your generosity. If you have not already, please consider supporting us on Patreon to ensure we can continue bringing you the best of independent journalism.

Now that we know Republicans won’t convict, turn it into a...

House Republican leader flails after blaming ‘everybody across this country’ for...