Stelter on Facebook: Months of scandal, then a name change? 03:13

Kara Alaimo, an associate professor in the Lawrence Herbert School of Communication at Hofstra University, writes about women and social media. She was spokeswoman for international affairs in the Treasury Department during the Obama administration. Follow her on Twitter @karaalaimo. The opinions expressed in this commentary are solely those of the author. View more opinion on CNN.

(CNN)As the world begins to truly contend with just how dangerous social media platforms can be, Facebook’s reckoning has been kicked into overdrive following former staffer Frances Haugen’s shocking allegations that the company has long known about its platform’s toxic effects on society — and has done little to try to fix them. 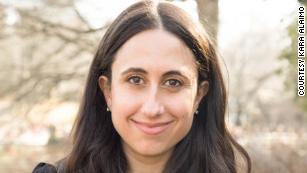 Kara AlaimoNow, amid this firestorm of criticism, the company has reportedly come up with a new public relations strategy: changing its name. According to a report by The Verge, Facebook will soon announce a new name that reflects chief executive Mark Zuckerberg’s stated focus on being part of a future so-called “metaverse” — an online world where our avatars interact in astonishingly lifelike ways.

There’s a glaring reason Facebook’s name change is such a smart move from a branding perspective, and it has nothing to do with the fact that the company may want to create a single umbrella brand for the three major platforms it owns — Facebook, Instagram and WhatsApp — or that it wants to focus on the metaverse. It’s because the public has lost faith in Facebook. And rightly so. For all the family photos shared or funny videos consumed that the company has made possible, “Facebook” is now also a name associated in recent years with misinformation, privacy violations, the spread of hate and autocracy.

But a new name won’t get to the root of the problem: Facebook’s bankrupt reputation. Going by a different name won’t magically create a brand in which consumers will place their blind faith.

Former Facebook employee speaks to CNN 04:03The only way for Facebook to restore that trust is to change its leadership and address the actual issues that have justifiably prompted so much concern. Facebook has pushed back hard against many of the allegations against it, calling some “misleading,” saying they have cracked down on anti-vaccine content and misinformation. The company also says they welcome regulation and contend their apps’ good outweighs their harm.Nonetheless, many who study misinformation remain concerned, and recent whistleblower Haugen asserted that Facebook continued to put profits before people. It’s essential for the company to truly tackle the problems it has already unleashed before it helps build a future “metaverse” in which technology will play an even bigger role in our lives than it already does.

The place to start is with Zuckerberg’s resignation.

Facebook whistleblower Frances Haugen confirms our worst fearsThe company has shown millions of us misinformation as we were deciding who to elect as president. It’s been accused of failing to crack down effectively on deadly misinformation about coronavirus vaccines (which, of course, save lives), and a report by the Center for Countering Digital Hate found that Instagram has even at times recommended vaccine misinformation to users.Independent research has long shown that using social media hurts the mental health of users — especially teens — because it creates the (often false) impression that everyone else is leading more glorious lives.Haugen testified that Facebook has been used to spread hate globally and foment deadly ethnic violence in Myanmar and Ethiopia. And Zuckerberg has misled users and US lawmakers about how outside companies access our data, raising frightening privacy concerns.

What’s stunning about the misinformation trend — and how to fix itFacebook, of course, views the situation differently. After Haugen testified before Congress that the company has long been aware of these issues and failed to meaningfully address them, a spokesperson told CNN Business that “we continue to make significant improvements to tackle the spread of misinformation and harmful content. To suggest we encourage bad content and do nothing is just not true.”The fact that the company continues to deny that it has let us down is a big part of the problem here. And the person in charge of Facebook through all of this has been, of course, founder Mark Zuckerberg.It’s clear that he lacks the moral inclination or the capacity to solve these problems. Either way, he’s got to go. The company should announce a new chief executive with all possible haste. It should be someone thoughtful and committed to transparency about how social media is harming our society — who has the will and competence to put the platform on a very different course.It’s troubling enough that the company doesn’t appear to be reckoning with the scope of the reforms that are needed. But what’s downright terrifying is that, at the same time as these dangers are coming to light, Facebook is trying to expand the way we use technology. Zuckerberg has said he’s focused on helping build a metaverse in which the physical and virtual worlds collide. We would increasingly operate as digital avatars in this realm.

Facebook is already endangering our elections, health, privacy and the very lives of people in places where it’s being used to sow discord. While a future metaverse could be a good thing if built correctly — giving people equal access to opportunities regardless of geography, disabilities, or child care and other commitments — Facebook shouldn’t take a single step further down this path until it first addresses the problems it has already wrought. Changing its name doesn’t do a thing to solve them.Shakespeare famously wrote: “What’s in a name? That which we call a rose / By any other name would smell as sweet.” Right now, Facebook by any other name would be just as scary for us as a society. And a new name that hints at an even larger takeover of our lives would be all the more frightening. Changing its name wouldn’t change this reality.

A huge threat to abortion rights and religious freedom