Here’s what you are not going to get in a major address from President Joseph Biden: textured rhetoric woven with references to the classics; eloquent, poetic phraseology ringing like heavenly music and leaving its listeners with echoes of Shakespeare, Lincoln and Rev. Martin Luther King Jr. 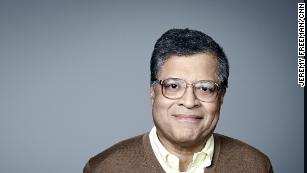 CNN Digital Expansion 2015 Gene SeymourHere’s what you are going to get in a major address from Biden: a torrent of phrases, some of them carefully clipped like a neighbor’s hedge, most of them rolling and gushing like a river, all of them aimed not at the gut in the manner of his immediate predecessor, but directly towards the heart, whether to soothe or to rouse, keeping at bay any haste or incaution.The speech that Biden gave after a Minneapolis jury convicted ex-police officer Derek Chauvin on all three charges in the murder of George Floyd decision was no different from any number of speeches Biden has given throughout his five decades in public life: so emotional, anecdotal and plain-spoken that it seemed more off-the-cuff than it likely was.In short, it wasn’t a “presidential” address to the nation so much as it was a “Joe” talk to the folks. All the folks.More to the point, it was a “Joe” talk that in its dual expressions of relief and resolve was well-suited to engage a verdict that, however logical and inevitable it may have seemed given the evidence and testimony leading up to it, took many people by surprise, especially African Americans whose expectations for justice in the violent, often deadly use of excessive police force against unarmed Black people have been perpetually thwarted in court.

Hear Biden and Harris’ call to George Floyd’s family after verdict 02:29Biden promised in his election campaign last year that he’d help change things. So far, he’s been doing so in his unfettered manner. And in phoning George Floyd’s family almost immediately after the verdict — and before appearing before the cameras to deliver his address — the president submitted proof that it wasn’t about scoring political points, but in sharing and healing others’ intimate pain.When Biden spoke about the emotional connection he’d made with Floyd’s young daughter, even to the point of repeating and concurring with what she’d said to her father, “Daddy, you changed the world,” the unapologetic blatancy of appeal to the heartstrings somehow made him seem more sincere, more human — and humane. More, if you will, “Joe.”

Consider also the wonder of a 78-year-old White president of the United States not only mentioning the words, “systemic racism,” but insisting that it be purged once and for all from American life. Among many things, it made you wonder whether this perspective was energized by the blatant and not-so-blatant bigotry directed against the first African American president during the eight years Biden served as Barack Obama’s vice president.Wherever and however it came, Biden’s willingness to talk about reforming the police and restoring Black America’s confidence in the judicial process was an unmistakable marker of how much things had changed.If there was one moment in Biden’s remarks that seemed discordant and untethered to their moment, it came in his insistence on lawful, nonviolent protest and his condemnation of violence in demonstrations aroused by the deaths of Floyd and others.Since the prospects for violent reaction were considerably lessened by the jury’s decision, you wondered why there was a need at that particular time for such warnings.

Why I’m not celebrating after the Chauvin verdictIt sounded as though the President’s expression of relief was interrupted by part of another, altogether different address he’d expected to deliver last night if things had gone the other way. Or it could also have been Biden’s way of nodding towards police departments and their supporters, signaling that whatever reforms he sought in policing, he wasn’t going to interfere with the proper and judicious enforcement of the law. Keep in mind, again, that the President has spent almost 50 years finessing his way with both sides of the congressional aisle.Remember, too, as both Biden and Minnesota Attorney General Keith Ellison insisted yesterday evening in the verdict’s wake, that however welcome the news was of Chauvin’s conviction, it was only a beginning.They’re right. But it’s a different beginning than whatever we’ve been used to up till now.